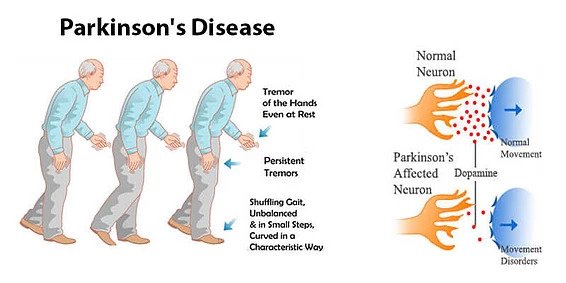 What is Parkinson’s Disease?

Parkinson’s disease is a progressive neurodegenerative disease meaning this is a disease of the brain in which there is gradual brain damage in a specific part of the brain. This damage gets worse over time. The damage occurs in the part of the brain that produces a chemical called DOPAMINE.

Dopamine is an important chemical in the brain because it helps with the movement of the body, sleeping pattern, learning, memory and attention.

What are the main symptoms and problems In Parkinson’s?

What are the other problems associated with Parkinson’s?

How is Parkinson’s different from Essential Tremor (ET)?

Simply, ET is just tremor while Parkinson’s patients have many more symptoms. ET is a relatively benign disease.

ET tremors are mostly in hands, but also in head, jaw, legs at time.

Sometimes patients have both ET and Parkinson’s together. So good clinical evaluation is essential for diagnosis.

What is Parkinson Plus?

This is a group of diseases in which there are symptoms in addition to the typical Parkinson’s symptoms such as difficulty in vision, more pronounced memory and alertness loss, more pronounced speech loss, rapid worsening etc. The overall prognosis is worse than Parkinson’s.

How is Parkinson’s Treated?

How do I delay the Parkinson’s from getting worse?

common problem when I see early Parkinson’s patients is the attitude that my disease is early yet so I don’t need to do anything; I will wait and start rehab when my disease gets worse. THIS IS THE MOST PROBLEMATIC MYTH.

Early rehabilitation in Parkinson’s disease can help in prevention of the problems in the first place.

At A4 Clinics, we follow many recommendations of the program from OHIO HEALTH, USA to delay the disease: http://www.delaythedisease.com/

Role of New Therapies in Parkinson’s

(a) Deep Brain Stimulation (DBS) – This is an invasive surgical procedure in which electrodes are inserted inside the brain to control and regulate movement. Often called “pacemaker” for the brain. Because it is a surgical procedure, there are more risks, benefits and costs.

Understanding Chronic Pain: Is It in Our Body or in Our Brain?